Since mid-January, my therapy appointments have been for 60 minutes instead of 45. Not only that, but most weeks I have also been able to go twice a week, instead of only once. These changes are a gift. Now I no longer leave Monday’s therapy session feeling angry, despairing or desperate because I just managed to open my heart towards the end of the session and then had to shut it back up for another week. I feel less afraid to talk to E about something difficult when I know it won’t be so long before I can see her again. There’s room to go deeper, when we have two whole hours a week to talk. I feel so fortunate that this is possible (while also on alert that my insurance may not permit this on an on-going basis).

Having the additional time made it a bit easier, I think, to raise the topic of dissociation during sex this past week. I could tiptoe around the topic a bit before diving in on Monday. We opened up the usually padlocked door to look at where my mind is (and isn’t) during some of my most intimate moments. The key message to me, on that day, was the my dissociation was a normal coping mechanism that I didn’t have to chase away. There were other messages, some affirmations that E suggested, but I had trouble remembering them after I left the session. I just clung to the idea that I wasn’t doing something pathological, I wasn’t deceiving my husband. I was just reverting to a coping mechanism that I’d developed a long time ago.

So I allow this message to travel around inside my head for a couple of days, reassuring me. Then on Wednesday, I am back in E’s office, sitting on the floor with the colored markers and a mandala I’m filling in with a peachy orange and different shades of blue. I’m not feeling very well (strong reaction to another medication change) and even carry some suicidal instincts with me into the session. And yet at the same time, I am happy to be back after only two days.

“I need to revisit what we talked about on Monday,” I tell E.

“Okay,” she says. “What specifically?”

I want to hear the big message again. I want more of the liberating words that tell me I’m not as broken as I thought. She’s happy to provide that.

And what were those affirmations we talked about? Uh oh, she didn’t write them down either. So together we try to reconstruct them, and in the process, we create some new ones as well:

I don’t even think those are the right words, but they do capture the ideas I’m underscoring for myself.

Somehow we moved away from talking about my core self that disappears when I’m aroused to the self that takes its place. Who is that person?

E pulls out a diagram from the internal family systems model. I haven’t seen this model before, even though we have certainly drawn from aspects of it in our work together before. She tells me we could think of the part that is there during sex as an exile, that is, a part that holds painful experiences from the past and has been cut off from the core self. 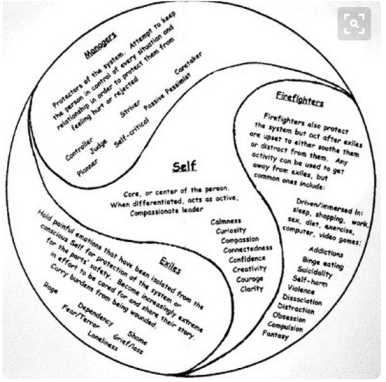 This makes sense to me. (Side note: the fact that it makes sense to me means that I have accepted that I didn’t make up my abuse stories. I want to call that out because it’s something I have struggled with for such a very long time. I feel almost proud for believing myself.)

We grow quiet for a few minutes, each of us coloring our own mandalas. Go ahead ahead and tell her, I whisper to myself. Some (presumably manager) part of myself is saying, don’t, this is enough, stop now. But I (presumably the core self I) decide it helps me to tell E about difficult things, so I take a breath and say, “That part that is there during sex… you know… she has a name. Is that too weird?”

I look down at the box of colors, very seriously, as if the decision about which shade of blue marker to use next is of utmost importance. I’m cringing inside.

“Too weird?” she replies casually, still looking at her own mandala, which she is filling in with a much wider range of colors than I’ve chosen. I’m so glad she isn’t looking at me. “Not at all. She probably has her own characteristics and ideas and beliefs, too.”

She’s right, of course, but I can’t say anything right now. E lets the silence hang there between us for a bit. Then she says, “You don’t have to tell me what her name is. Or you can tell me; that’s for you to decide. I don’t want you to feel any pressure, but of course I am curious, and I’d like to learn about her.”

I know we are near the end of our time together. I know it’s good for me to share. And yet, I decide this time to listen to the manager part. Or perhaps I’m compromising with that part. At any rate, I tell her, “I think that’s enough for now. It’s a lot already.”

And so we leave it there, for now. I’m glad I held something back, not in a power games type of way. Somehow it felt respectful to myself to slow down a bit and leave something for later, rather than vomiting everything up five minutes before I had to leave.

It feels to me that the extra time in weekly therapy, 120 minutes instead of 45, allows me to talk about deep and difficult things and also lets us bring that conversation to a place of calm acceptance. To my surprise, I haven’t been triggered by this conversation. It takes up space in my mind, but I don’t feel desperate. On the contrary, I feel centered and thankful. 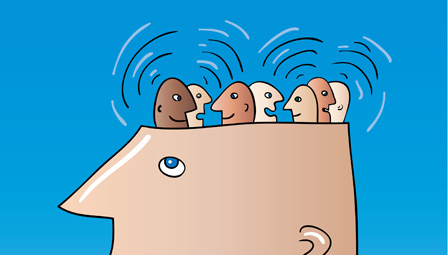